On New Year’s Eve, more than a million people will gather in New York City’s Times Square to watch a crystal ball drop and more than 100,000 people are expected to gather in Nashville’s Bicentennial Capitol Mall State Park to watch the musical note drop. But if big crowds aren’t your idea of a party, here’s some musical alternatives to ring in the new year:

END_OF_DOCUMENT_TOKEN_TO_BE_REPLACED 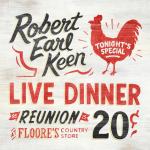 You know  Robert Earl Keen is an amazing musician and entertainer. What you may not know is that he’s funny. Really funny.

If you have ever heard the West Texas troubadour trading one-liners with Charlotte DJs John Boy and Billy on their Big Show or seen him live in concert at one of the myriad music festivals he headlines, you might have guessed he’s got a sense of humor. But in one-on-one conversations, he drops one-liners faster than Jim Gaffigan.

But that doesn’t mean he can’t be serious. And make no mistake, he’s serious about his music. But not too serious.

“That one was totally raw and reckless,” he said in a recent phone interview. “I truly didn’t intend to make a record. It was truly a grassroots kind of thing. For a year there, you could hear that record blasting out of dorm rooms, bars, cars and parties. It was warts and all but it was fun.”

END_OF_DOCUMENT_TOKEN_TO_BE_REPLACED

Those who know me well know that the Winter Solstice (otherwise known as the shortest day of the year) is my least favorite day. But this year just might be different thanks to a dear friend’s generosity and the talents of Leah Shaw, a North Carolina-bred singer songwriter.

END_OF_DOCUMENT_TOKEN_TO_BE_REPLACED

Fans of MerleFest and other bluegrass festivals are no strangers to the talents of the Del McCoury Band. They are also in for a holiday treat this weekend where they can catch the band performing  at 7:30 p.m. Saturday at the Historic Earle Theatre, 142 N. Main St., Mount Airy.

Elected into the International Bluegrass Music Hall of Fame in 2011, Del McCoury is also the recipient of the National Heritage Fellowship lifetime achievement award from the National Endowment for the Arts.

The Carri Smithey Band will release its debut album, “Midnight Ride,” at 8 p.m. on Saturday, Dec. 10, at the Gibb’s Hundred Brewing Co., 117 W. Lewis Street, Greensboro, N.C. The Ends will also play. I first wrote about Smithey and her bandmates when they were finalists in MerleFest’s Chris Austin Songwriting Contest here.

END_OF_DOCUMENT_TOKEN_TO_BE_REPLACED

This just in from Smitty’s Notes:
This first-of-its-kind concert will feature the world-renowned reggae group The Wailers performing with the Piedmont Wind Symphony at 7:30 p.m. on Friday, Dec. 16, at the Lawrence Joel Veterans Memorial Coliseum.

END_OF_DOCUMENT_TOKEN_TO_BE_REPLACED

This just in from the good folks at MerleFest:

“MerleFest, presented by Window World and slated for April 27-30, 2017, has just announced five more artists added to the 2017 lineup: Marty Stuart & His Fabulous Superlatives, Sarah Jarosz, The Steel Wheels, The Kruger Brothers and Mipso. MerleFest 2017 will be the 30th annual homecoming where musicians and music fans return to Wilkes Community College in Wilkesboro, North Carolina, in the foothills of the Blue Ridge Mountains.

“Many artists who have graced the stages over the past three decades plan to return for the celebration! MerleFest has already announced over 75 artists, including Zac Brown Band with a very special acoustic set, Del McCoury Band, Jim Lauderdale, Sam Bush, Jerry Douglas, Peter Rowan, Mountain Heart and many more. The rest of the packed lineup for MerleFest 2017 will roll out over the next few months.”

You can find me, Lisa Snedeker on The Huffington Post.
musicreporterblog
Create a free website or blog at WordPress.com.